Think physical activities and the first thing that comes to your mind are activities like running, jogging, climbing stairs, etc. And, if you happen to be someone who is a fitness freak or bent on losing some serious flab, then in all likelihood you might even know the number of calories these activities help you burn. However, in the duration of this transition to a fitter you, have you ever considered sex as an activity to lose weight? Yes, you’ve heard that right. Now, let us admit, for most of us, whether we are planning to lose weight or not, this thought would have crossed our mind. And why not? Considering the amount of panting and sweating involved, anyone would be tricked into believing that it is, after all, a good form of exercise as well, beyond other things. But, is there any truth to this at all?

The idea that lovemaking can also be a form of calorie-burning physical activity is not new, though. In fact, several scientific researches have been made in the past in this regard. One particular research conducted by the University of Quebec, Montreal (Canada) studied around 21 heterosexual couples who were all in their 20s. For this research, the researchers strapped armbands around the participating couples’ arms to track their total energy expenditure. They assessed the total energy spent during other forms of exercise and during sex. Each couple’s perceived effort, fatigue, perceived energy expenditure, and pleasure were also part of the assessment after every sexual activity. These couples were also made to complete a 30-minute endurance exercise on the treadmill with a moderate intensity. This was done to compare the total amount of calories burnt during the two activities. The results of this research showed that sex did not burn as many calories as a moderate-intensity exercise. Nevertheless, it did show that sex did help in burning a considerable amount of calories1. 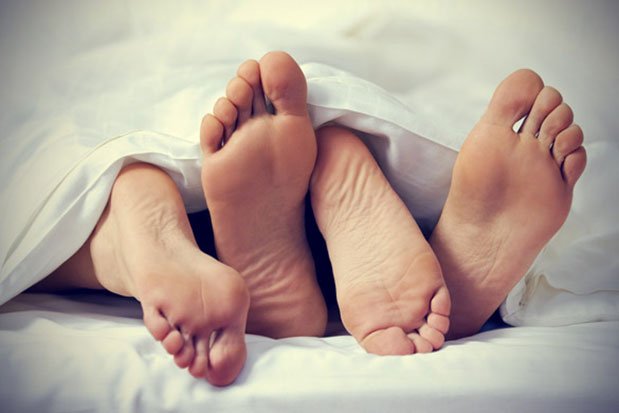 Can Sexual Activity Be Used To Burn Calories?

On the surface, going by the results of the research, it does appear as though sexual activity would hardly make any difference to the number of calories that you burn. However, it entirely depends on how you approach it – as a pleasurable indulgence or a calorie-burning activity. If you wish to go with the latter, then we would suggest that you don’t solely depend on sex to lose weight or burn calories. Having said that, there is no harm in trying to burn a few extra calories while you are in the act, right? Here are a few ways you can get your next romp between the sheets to help you burn more calories:

Like any other exercise, the longer you are at it, the more the calories you burn. The same applies to sex. Try to indulge in it for a longer time than usual. You might find it a bit difficult in the beginning since sex is pretty much a spontaneous reaction and cannot be timed. But you can always add some amount of role play or foreplay to extend the time.

Turn Up The Heat

If you have indulged in a hot and sweaty session once in a while, then it might be a great idea to make it a regular state of affairs now. To make your warm and steamy sessions even more interesting, choose new places for doing it. A couple’s sauna or a warm shower together will not only spice up your love life but will also help you burn far more calories than usual.

Positions Can Make A Difference

While we did mention that sex is often spontaneous, there are apps that can help you calculate the number of calories burnt during each of your romps2. Such apps usually require you to enter details such as yours as well as your partner’s gender and weight and the position used. It then calculates the total number of calories burned based on the sex position.

For instance, if a woman weighs 64 kgs and her boyfriend/spouse weighs around 86 kgs, then a missionary position with the woman below can prove ideal for them to burn ample numbers of calories. The woman would be able to burn 14 calories and the man would burn 47 calories if they assume this position for ten minutes.

On the other hand, if the couple used a standing position with the woman in front, then the woman could burn 30 calories and man, 51 calories, in ten minutes.

Finally, if the man would hold the woman up for ten minutes during the act, she could burn up to 40 calories and he could burn 65 calories.

Other Health Benefits Of Sex

While we discuss how many calories sex could help us burn, let us not forget the other health benefits it offers. Here we list some of the important ones, in case you didn’t know them already:

Good For The Heart

According to a scientific journal in the American Journal of Cardiology study, men who indulged in lovemaking at least two times a week were at a comparatively lower risk of developing heart disease than men who made out only once a month3.

Better Sleep Along With Stress Relief

This one is quite obvious. Many people swear by the stress-relieving benefits of sex. Most people also admit that soon after a round of good sex, they’ve slept like a baby, snoring their blues away! The reason for this is that when you climax during a session, it often releases oxytocin and prolactin hormones. Both these hormones have often been linked to promoting relaxation, induce sleepiness, and relaxation.

So, does sex really help you burn more calories? Well, while the jury might still be out on this, we need to remember that it has various other benefits, including helping you relax in these stressful times. However, if you want to consider this as a standalone activity to lose weight, then we suggest you ditch the idea. Just go for the old-fashioned ways like walks, jogs, or treadmills at home! And make sure you keep yourself safe from infections as well while doing so!